A stylish design and a robust feature set combine to create an impressive 4K television that is sure to please.

Samsung’s new flagship Neo QLED 4K TV for 2021, the QN95A, is the first to feature a Mini LED backlight.

Not to be confused with Micro LED, a completely different self-emissive display technology, Mini LED utilizes a newly developed backlight that is significantly smaller and more efficient, allowing for an increase in dimmable zones and thinner panels.

The results speak for themselves, with stunning SDR and HDR images that benefit from deep blacks and brighter highlights, all without blooming or loss of shadow detail.

The inclusion of quantum dot technology results in saturated and nuanced colours that are also highly accurate thanks to the Filmmaker Mode.

Unlike last year, Samsung is not sacrificing its 4K lineup to drive 8K sales. Thus, the QN95A offers an impressive array of features, led by a well-designed and comprehensive, innovative platform that supports all major streaming apps.

Additionally, there is a slew of cutting-edge gaming features that will delight owners of next-generation consoles.

The QN95A is not only visually appealing; it also sounds fantastic, thanks to Object Tracking Sound Plus (OTS+), which crams a powerful 4.2.2-channel sound system into the ultra-slim chassis of the TV.

This is another triumph of Samsung’s industrial design, with a simple but elegant shape, a solid metal stand, and a nearly bezel-free display.

Given the excellent audio capabilities, it’s a shame that there is no onboard Dolby Atmos decoding, and Samsung’s continued refusal to embrace Dolby Vision continues to frustrate.

Nonetheless, the only genuine criticism is the absence of Freeview Play support. Overall, this is an excellent new model that successfully throws down the Mini LED gauntlet.

For more on the topic, you may also be interested in:
Philips OLED 805 Ambilight TV The Samsung QN95A maintains the company’s elegant and minimalist design ethos, with a slim panel and almost no bezel.

With a full-array Mini LED backlight and eight speakers hidden behind the panel, it’s a wonder Samsung managed to fit everything into a 15mm-deep chassis.

The stand is simple to assemble and enhances the overall aesthetic of the space.

Additionally, it is pretty substantial, providing robust and stable support.

Alternatively, you can wall-mount the QN95A using the optional ‘No Gap’ bracket and the single cable from the clever One Connect box, which simplifies, stylishly, and neatly installs the unit.

The One Connect box has been redesigned to be more sleek and elegant.

Additionally, the box’s reduced size makes it more discreet, allowing it to be easily hidden away when necessary.

Another welcome addition is the textured matte black finish, which replaces the earlier glossy black boxes, a magnet for fingerprints and smudges.

The box features four HDMI inputs, one of which supports eARC (HDMI 3).

The HDMI inputs support data transfer rates of up to 40Gbps, enabling them to accept 4K/120Hz, VRR, and ALLM signals.

While these are not full HDMI 2.1 connections, they provide adequate bandwidth, making this an excellent choice for next-gen gamers looking to get the most out of their new console or consoles.

Other than that, it’s a fairly standard selection of physical connections, including two USB 2.0 ports, twin tuners for terrestrial and satellite broadcasts, a CI slot, an optical digital output, and an Ethernet port.

Additionally, there is a robust selection of wireless connectivity options, including Wi-Fi, Bluetooth, and Apple AirPlay 2.

This streamlined wand is comfortable to hold, simple to operate with one hand, and includes all of the essential controls and some dedicated buttons for popular streamers.

This year, the batteries are recharged via a solar panel on the back, making them more eco-friendly.

For more on the topic, you may also be interested in:
Sony A90J OLED TV The Samsung QN95A is powered by the Tizen smart TV platform, which nowadays rivals LG’s webOS in the user interface, responsiveness, and functionality.

The bottom launcher bar and a second layer above facilitate access to additional content. The navigation system is simple to use, and you can even use voice control if you prefer.

The app support is exhaustive, providing access to every major streaming service. That means you can choose from Netflix, Amazon, Now TV, Disney Plus, Apple TV Plus, Rakuten, and YouTube, to name a few.

The only criticism (for UK viewers) would be the absence of Freeview play support, but aside from that, it’s an impressive collection of television smarts.

The amount of content available can be overwhelming at times, but Samsung’s Universal Guide assists users in finding what they’re looking for by presenting everything through an intuitive interface.

The guide then analyzes your viewing habits and creates a single ‘For You’ page with content tailored to your preferences.

The Digital Butler facilitates connection by automatically scanning for nearby devices, detecting them, and visually representing them.

Bixby and Alexa are pre-installed, and you can access Siri via Apple’s AirPlay 2.

Additionally, the SmartThings app enables a simple setup and a measure of control. The Samsung QN95A is a Neo QLED television, the first to feature a Mini LED backlight.

This is accomplished by using a newly designed microlayer that contains LEDs that are significantly smaller than those found in previous generations.

These LEDs do not require protective packaging or lenses around the diode, enabling thinner panels and increased dimmable zones.

This increase in zones necessitates increased processing power and enhanced algorithms included in the new television.

The Quantum Matrix system coordinates the various zones, and the Black Detail Boost feature enhances the perceived detail of shadows.

The new Neo Quantum Processor significantly increases processing power through the use of multi-intelligence deep learning.

Rather than using a single neural network, this processor combines sixteen to form a neural analyzer optimized for video upscaling and processing.

All of this additional power is intended to provide the best experience possible, regardless of what you’re watching.

The latter uses dynamic metadata to adjust the tone mapping on a scene-by-scene basis and now incorporates a sensor to tailor a performance to the ambient lighting conditions in your room.

Regrettably, Samsung has yet to embrace Dolby Vision.

There are several image modes available, with Standard being the default.

Purists can still opt for Filmmaker Mode, designed to deliver images accurately and in the manner intended by the content creators. The Samsung QN95A uses different zones and unique dimming algorithms to achieve the deepest blacks and brightest highlights possible without introducing blooming or losing detail in the shadows.

Whether in SDR or HDR mode, the images created by this TV are sure to please, even more so when a quantum dot is added for its saturated but nuanced colors.

Naturally, once you switch to native 4K, the TV can show off, allowing you to pick out every thread in The Queen’s Gambit’s 1960s fashions (Netflix).

While the lack of Dolby Vision is disappointing, Amazon shows such as The Grand Tour benefit from HDR10+.

It’s a challenging scene, but the QN95A handles it expertly, with no haloing or other artifacts.

With their deliberately over-saturated color palettes, films like Guardians of the Galaxy Vol. 2 and Pan pop off the screen in a vibrant display of primary and secondary colors.

The QN95A’s Dynamic picture mode produces over 2,000 nits, and the more accurate Filmmaker mode has over 1,600 nits.

This means that for most HDR content, the TV does not need to tone map; however, when it does, it does so correctly, retaining detail in the image’s darkest and brightest areas while maintaining creative intent.

Finally, Samsung’s motion handling is equally impressive, with 24p content appearing smooth and free of the judder or unwanted artifacts.

In comparison, the LED Clear Motion setting inserts a black frame into the image, dimming it but improving the motion.

For more on the topic, you may also be interested in:
Hisense U7QF QLED TV The Samsung QN95A features an LCD, which eliminates the risk of screen burn during extended gaming sessions.

The Game Motion Plus mode is intended to smooth out motion while maintaining a reasonable level of lag.

There is even support for the ultra-wide 21:9 and 32:9 aspect ratios used by several PC games.

Samsung introduced the Game Bar to help you keep track of all your gaming options.

This convenient feature appears when a game source is detected, providing an overview of critical gaming metrics such as HDR, frame rate, and VRR.

Additionally, it displays all necessary gaming image adjustments and settings.

These features work together to create a delightful and responsive gaming experience with extremely low input lag and no screen tearing.

The images are detailed and sharp, the HDR is vibrant, and the motion is smooth and precise.

The addition of the Dynamic Black Equaliser enables you to adjust the image’s darker areas, assisting you in spotting dangers lurking in the shadows. The Samsung QN95A’s audio performance is awe-inspiring, owing to the inclusion of Object Tracking Sound Plus (OTS+).

This method seamlessly integrates eight speakers into the TV cabinet’s outer edge, resulting in a 4.2.2-channel system powered by 70W of amplification.

As a result of the addition of top speakers, the resulting soundstage is surprisingly expansive and immersive.

OTS+, on the other hand, does more than add more channels; it also analyzes the audio signal and correlates sounds to the location of specific images on the screen.

This is effective, resulting in a more engaging experience with enhanced directionality and immersion.

It’s disappointing that Samsung has yet to include Dolby Atmos decoding on board, despite the inclusion of height speakers.

However, the QN95A can return Atmos to a supporting soundbar or AV receiver via ARC from its internal apps.

The Samsung QN95A also supports eARC, enabling it to pass lossless audio back via HDMI to a compatible soundbar or AV receiver.

Should I buy the Samsung QN95A?

You desire a comprehensive, cutting-edge platform
Samsung’s innovative platform is unmatched in terms of selection, including every primary streaming service and a slew of useful features – all wrapped up in an attractive, intuitive-to-use, and highly responsive interface.

You desire an abundance of gaming features
Samsung’s televisions have long been the preferred choice of serious gamers.

The QN95A continues this tradition with a 9.2ms input lag, support for all the latest features, and a good Game Bar that displays all the settings in one place.

You demand Dolby Vision
Samsung will argue that the superior HDR performance eliminates the need for Dolby Vision.

Nonetheless, it isn’t easy to justify the company’s stance, given that almost every video streamer utilizes this dynamic metadata format and is supported by every other television manufacturer.

You desire Dolby Atmos
Samsung’s reluctance to decode Dolby Atmos is all the more perplexing, given that the company’s soundbars support the audio format.

While Atmos can be output via ARC, it would be ideal if the television’s 4.2.2-channel system could utilize Atmos’ height channels.

You require Freeview Play
While the Tizen-powered innovative system supports all UK catch-up services, which work flawlessly, the absence of Freeview Play means they are not integrated into the EPG (electronic program guide), which is a shame. 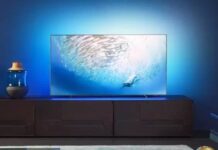